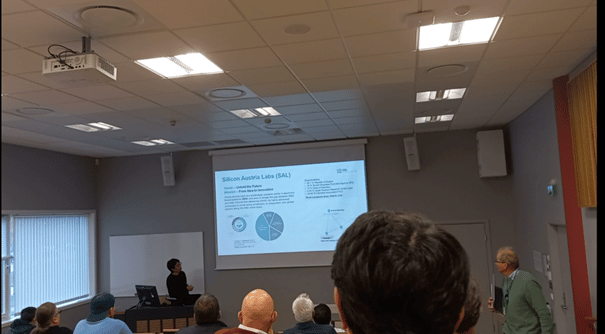 On Friday, 4 Nov 2022, Dr. Lixiang Wu, staff scientist from SAL, gave an invited talk on piezoelectric MEMS for acoustic and ultrasonic applications in the Friday seminar of University of South-Eastern Norway (USN). The presentation title is ultra-thin MEMS microphone with extreme broadband and dynamic range performance for aerodynamic monitoring. This talk started with a brief introduction to Silicon Austria Labs GmbH (SAL). Then, he introduced the progress on the AEROMIC project and presented the recent results of the first microphone test at Airbus (Toulouse, France) in October, 2022.

Many professors, researchers, and students attended the lecture and asked very interesting questions about our piezoelectric MEMS technologies for acoustic and ultrasonic applications. After this talk, we had a discussion with Professor Einar Halvorsen (the Head of Department of Microsystems) and Professor Xuyuan Chen. Also, we visited the MST-lab, which stands for microsystem technology, and is also part of the Norwegian Micro- and Nanofabrication Facility (NorFab) together with NTNU NanoLab, UiO and SINTEF MiNaLab.

The microfabrication and preliminary testing of this wafer were completed within three weeks in the cleanroom of Silicon Austria Labs. The structure is a specially designed microphone with two pairs of triangular cantilevers. The devices were characterized by FIB-SEM and LDV in the ultrasound laboratory of SAL. The aeroacoustic characterizations were conducted at the BACCHUS test bench in Airbus. The sensitivity of 3.2mV/Pa@30kHz, signal-to-noise ratio (SNR) of 60.2 dB (ref. 94 dB SPL, 30kHz), frequency range up to 55 kHz, and dynamic range up to 147 dB SPL were obtained in the first preliminary test. The MEMS microphone samples were also acoustically characterized within high-speed air flow. The overall performance of the dual-frequency piezoelectric MEMS microphones based on AlSc30%N thin films is better than the state-of-the-art microphones taking into account key parameters such as form factor, acoustic performance, and product price. 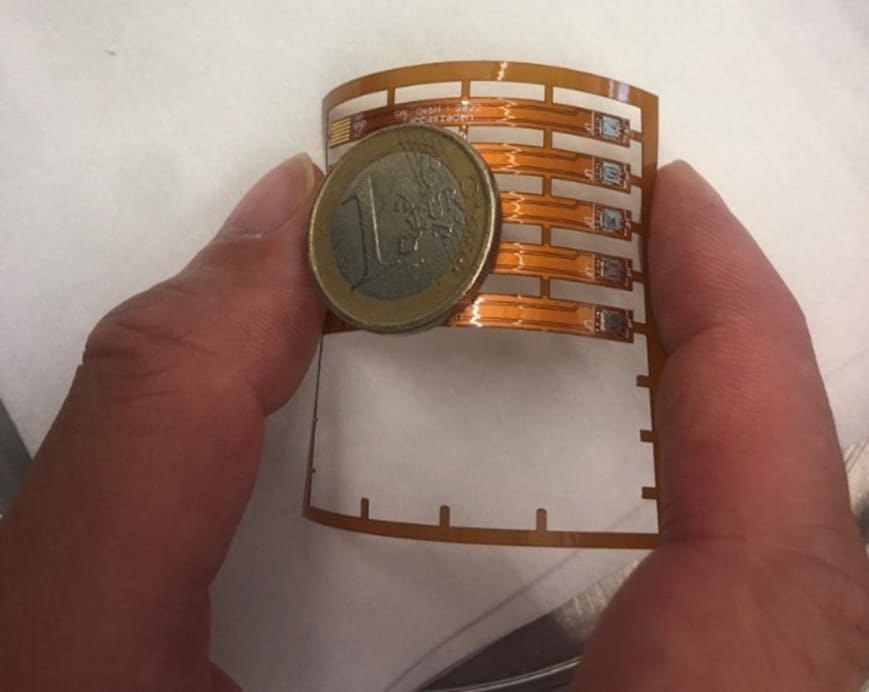 Piezoelectric MEMS chips bonded on flexible PCBs (comparing with the 1€ coin, the size of MEMS chips is much smaller) 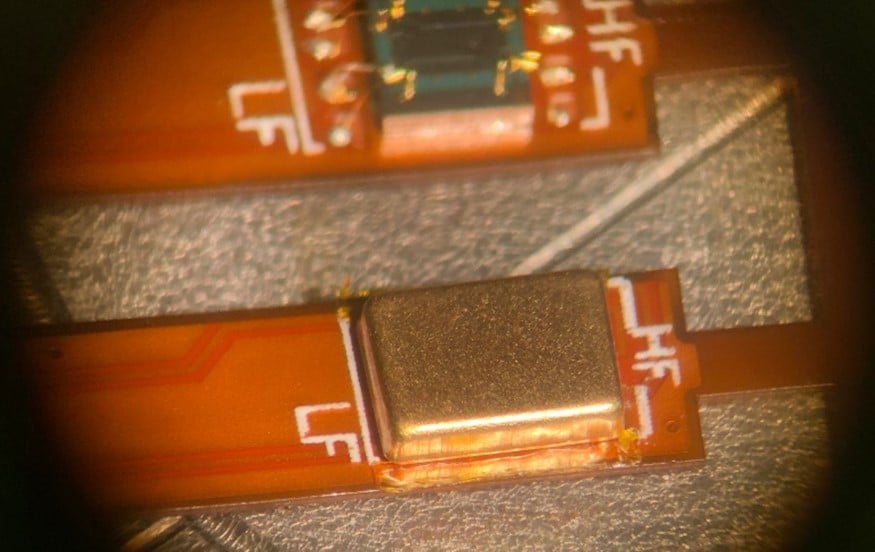 A piezoelectric MEMS microphone packaged with a small metal lid 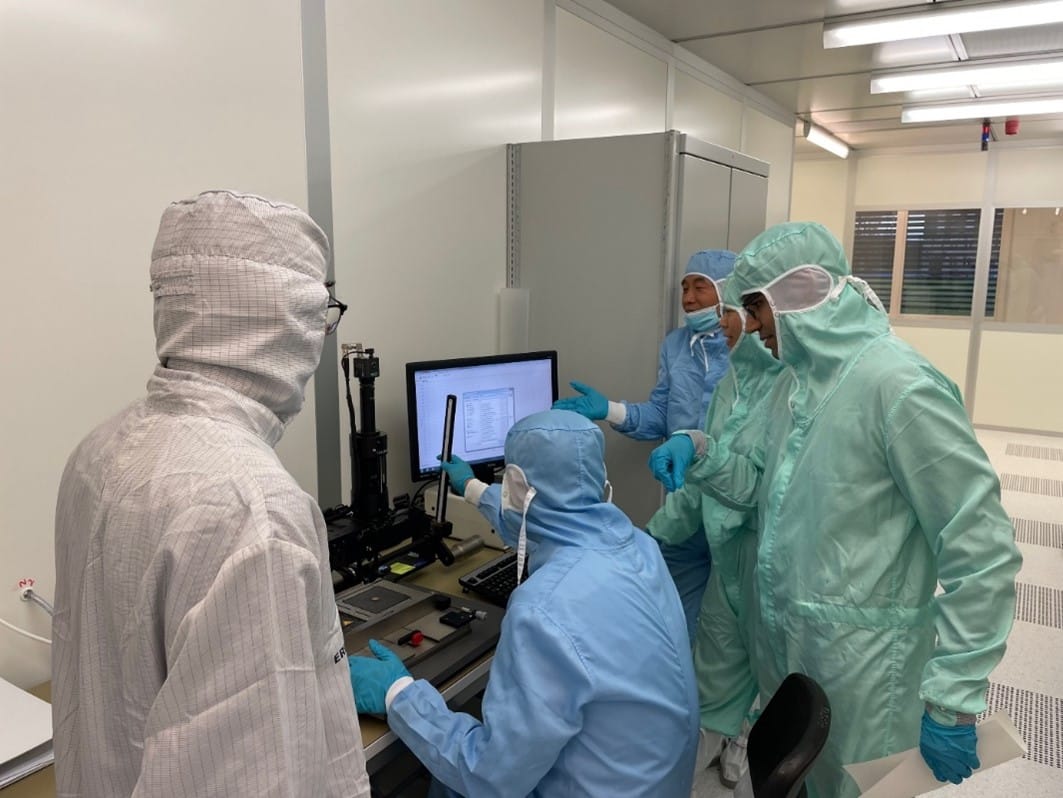 In the cleanroom at the University of South-Eastern Norway (USN), Dr. Thai Anh Tuan Nguyen is demonstrating how to do the flip-chip bonding for piezoelectric MEMS microphones. 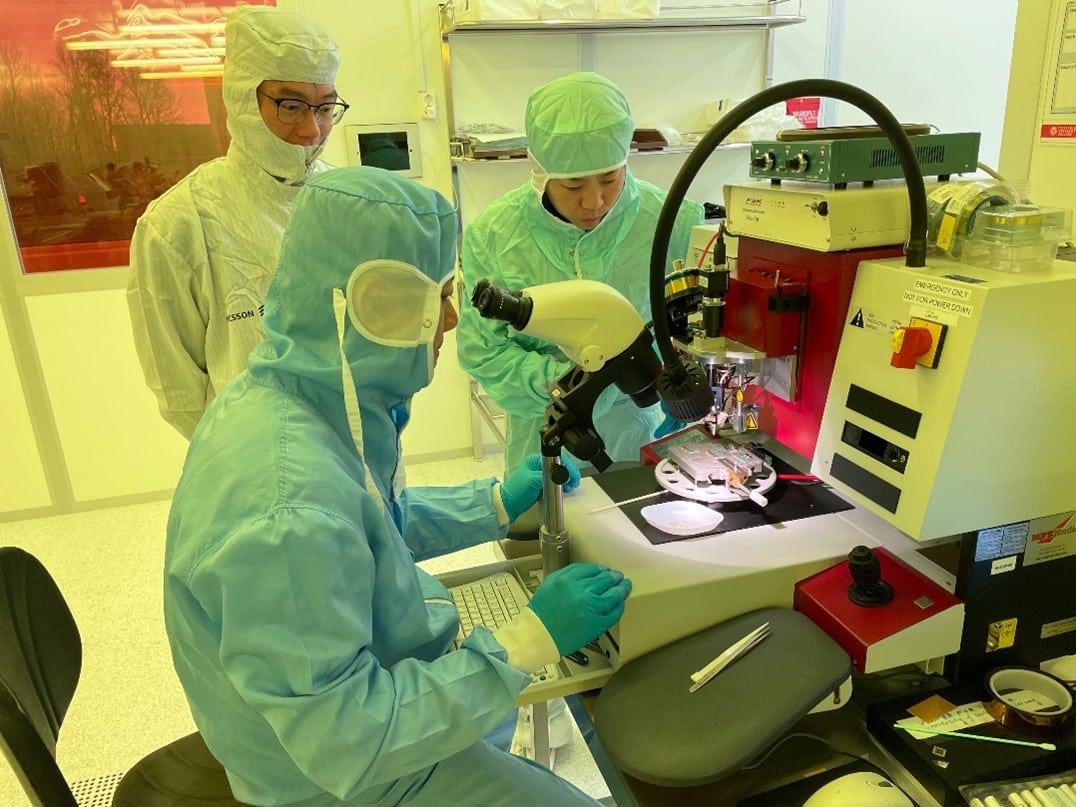